I have been very busy in the past few weeks. I went to a fiber show, Stephenson County Fiber Arts Show, on the 17'th of April. I had gotten a call on the 12'th that they had an unexpected opening. This was just 4 days before I needed to go down to set up my booth! I had gotten my mill spun yarn back from Mora Valley Spinning Mill just in time and was busy washing and dyeing (and drying it outside) so I could have some to sell. I also had to get all my wool packed and try to make things easier for my sister who would be taking care of my sheep and goats by putting them on part time pasture so she would not have to feed as much hay. But before they could go out I had to deworm the ewes/does and eartag some of the lambs. After hectic running around I was finally ready! I traveled with Carol Wagner as she had extra space and that saved both of us some gas money. The show went fairly well so I am happy.

The yarn that I had mill spun is 33% mohair and 67% Shetland cross lambs wool. I sent about 40# to be spun fingering weight. Mora Valley Spinning Mill did a great job! (They used to be Taos Valley Spinning mill, but changed names as they moved.) I have to say that of all the mill spun yarn I have seen I like Mora's best as they do more of a worsted yarn and that really brings out the shine and results in a smoother and softer yarn. (I have also seen the same wool from the same farm spun at 3 different mills and like Mora's best!) The other good thing about Mora is they charge on out going weight not incoming weight.

I am also very busy washing wool and mohair and need to start dying soon too. 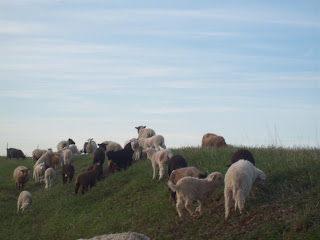 Bouncing on the hill is great fun! 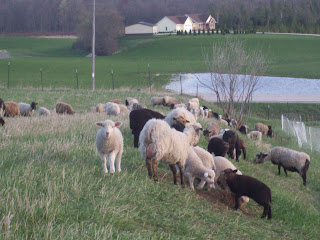 Sheep grazing- the pond is a flooded field after we got some very much needed rain.


This year I got the sheep and goats out on pasture early to see if I could keep ahead of the spring flush. (Last year the grass got way too mature.) I put them out on pasture around the 16'th for part time grazing. I was still feeding some hay and grain so that they would not eat too much grass so early in the year! As of last night they are getting full time pasture! Hopefully I have just the right amount of grass-all summer long.

Another experiment I am trying this year was to sprinkle (yes by hand) red clover seed in a 3 1/2-4 acre pasture when it was raining and have the sheep out there hoping they will trample it in. This pasture is the worst one and had been over grazed in the past. I thought about doing that last year and when I mentioned that to the people at the local feed mill they said it would not work and looked at me like I was crazy. Then late last summer I saw on White Fish Bay Farm's blog That they had broadcasted red clover seed and gotten the sheep to trample it in. It worked for them! 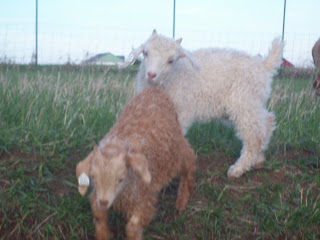 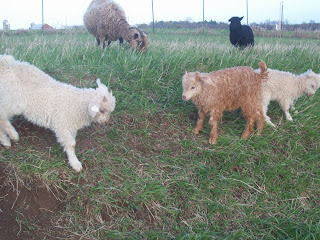 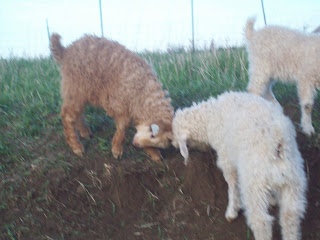 Boys will be boys! The buck kids are already starting to play butting games!


Oh and an update on Emrald the ewe who I thought had no milk-she does have milk on one side and is feeding her lambs and I am not supplementing. They are growing well so she is not a cull after all!