I just finished up shearing my goats. Yoohoo! Lots of mohair to wash. My white color carrier doe kid from last year had over 4# of mohair. Her fall fleece was around 2# so that is over 6# of mohair for a little about 60-65# goat! Wish my sheep were that efficient! :) 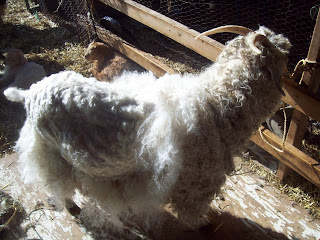 Here I am in the process of shearing one of the does, Belle (a color carrier white.) 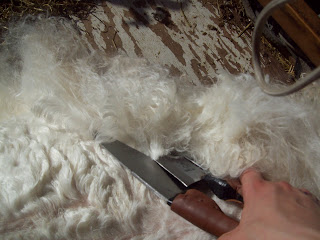 Got the bucks done. The first thing one of them did was pee all over himself-goat cologne. Yuck! The bucks also had to fight to make sure that their place in the "butting order" did not change. I fed them some hay as I thought things were getting out of hand when one had blood on his horn base. They took a snack break and then went back to fighting, but not as hard as before. Oh well, they settled down as this morning both are friends again. (Bucks don't fight the same as rams. They alternate between growling at each other while pushing and shoving on each other and jumping up in the air to crack down on the opponent.)
Posted by Laura at 5:39 AM