I had a Johne's Disease scare. Because of the scare I have learned a bit more about how serious the disease is in sheep and goats. It isn't quite as serious in dairy herds due to how they are managed. The young from dairy animals are separated from the source (dam) at birth and fed on milk replacer.
For example if I did have Johne's I have sold animals to about five farms since buying the suspect. One of the farms I know has sold to at least two other farms since getting a goat from me and the suspect was in contact with two other farms animals when she was hauled home. So that would be at least eight farms possibly infected including mine!
The blood test is not very accurate and can have both false positive and negatives. It only costs $5. The blood test can be thrown off especially if there are poultry on the same place as the sheep/goats due to a bacteria they carry that looks similar to Johne's. The fecal test is much more accurate and is around $20. They culture the manure to see if there is any shedding going on. The most accurate test is to culture the ilium, but one can't do that on a live animal.
Also from what I have found out testing animals under 12-18 months is a waste of time and money as they won't come positive even if they are infected until they are older. (Sometimes an animal will be sick by 18 months, but only very heavily infected ones.)
I tested both the suspect and a pooled manure sample of manure from adult animals and both came back negative! Sigh of relief.
From now on I am going to do a pooled manure sample from adult animals every year.* I have been told by a vet who specializes in Johne's in sheep and goats and she said it is the responsible thing to do if one is selling breeding stock.
*If the pooled sample came back positive one could then go on to individual samples.
I am going to ask for a manure culture on any animal I buy. If the animal is under 12-18 months I will ask for a pooled sampling and/or a sample from the dam to be tested. I am not going to every rely on the blood test. From what I read one has to have the blood test come back negative five years in a row to count as negative and I don't know anyone who has done that. Doing individual manure testing on everyone is not really possible if one has any number of animals. For me it would cost $2,000 to do it once. I am going to do a manure sampling on any poor doers and will get the vet to look at the ilium on any older culls if I can get the butcher to save if for me.
If a flock does have Johne's animals under a year are most susceptible and the problem is it only takes 1/4 tsp. to infect a young animal. The dam can pass Johne's through the milk to the young and in very sever cases it can cross the placenta and be infected at birth. If a flock has Johne's they will end up having to cull animals prematurely, have animals not hold condition and the animals may not produce as much milk and then the lambs/kids would not grow as well. In sever cases they can die as young 18 months. Stress (kidding/lambing, weather, transportation, etc) bring on symptoms. Sheep and goats often do not get the sever scouring that cattle get. It is more just wasting away in sheep and goats. The fleece can be affected and be harsh, brittle and falling off due to the disease.
Thankfully I do not have Johne's! This scare has made me much more aware of a potentially devastating disease. There are many other serious diseases out there. OPP, CAE, CL, Hoofrot, and Scrapie. I am also planning on testing any culls/thin animals for CL, OPP and CAE.
Posted by Laura at 6:29 AM 3 comments: 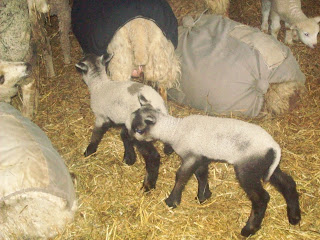 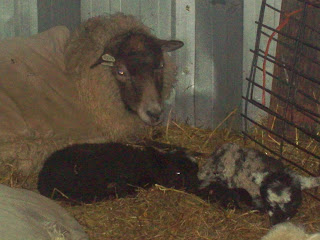 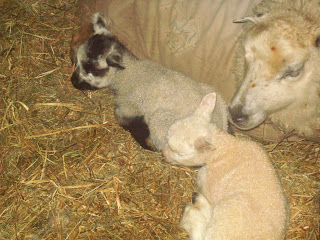 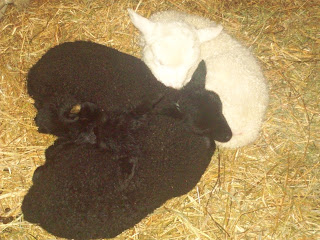 Triplets? I had three ewes lamb at once and some babies got mixed up. I think one ewe had a single, one twins and one triplets but don't know for sure! The one I think had a single is taking care of two lambs and the one that I think had twins only kept one lamb. 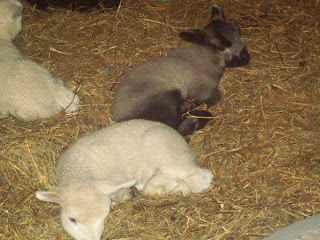