I found another UK Shetland Breeder blog the other day.
http://www.purplehurdle.co.uk/blog.html also another UK breeder has a neat website with lots of Shetland sheep pictures (they also have Shetland X Poll Dorsets) and some wool pictures http://www.whaddongrove.co.uk/index.php .

Also a couple websites for related breeds (to the Shetland) sheep

Sigh, our neighbor's wonderful dog attacked our "Tommy" (our tom turkey). "Tommy" has no tail and his back is chewed up really badly. (ie. no feathers and chunks of flesh gone.) I don't know if he's even make it. I gave him some banamine and he is acting a bit better. (If he's still acting bad tomorrow we'll have to put him down.) I think "Tommy"was protecting his feathered ladies. Poor "Tommy"!
To top it off one of the turkey chicks is dead. The weak one is the one who died.
Posted by Laura at 3:28 PM 4 comments:

We have three Bourbon Red hens and a tom. I had the suspicion that someone was trying to have babies as one of the hens had disappeared . Well last week the mother hen came out with one chick (poult). One. Sad sate of affairs to only have one baby! I wondered if some chicks may have gotten lost in the grass and found the nest. There was one empty shell and 2 eggs that had chicks in them, one of which had a hole pecked in it. 5 were very rotten eggs. (One can tell that they are rotten as they are light and there is liquid inside the egg.) I thought well maybe she know that those 2 wouldn't hatch (dead), but brought them in and put them in the incubator any way.

Oh, her one chick was not a "newborn" as he already had wing feathers.

Well the "dead" chick was alive after spending a couple hours warming up in the incubator. He was having trouble getting out so after leaving him for 2 or 3 hours with no progress we decided to help him. After he was out of the shell, dried and rested it was very apparent that he was not "right". He could not get up and kept flipping over and twisting when he tried. It is not very uncommon to have a chick with that kind of problem (it's caused by being in the shell in a funny way and a variety of other factors.) My mom and I did not want to put him down so we decided to wait and see what he was like the next day. (Chicks don't need to eat right after they hatch as just before they hatch the last of the egg yolk is absorbed by them.)

By morning he was still not "right". I have him a medicine dropper of sugar water and a tiny piece of boiled egg yolk in his beak (old farmer remedy for weak or stressed chicks. ) I would take him out and work with him several times a day. He still wanted to stand but, one of his legs kept going to the side and not working. I kept pushing his leg back to the right position each time. After two days he started getting weak and could not hold his head up. On Sunday morning I decided to give him propylene glycol in a medicine dropper. It worked he was stronger again . When we got back from church he was up and walking! Out to his mom who was locked up in a pen with her one chick he went. He was not sure what do do at first, but got the hang of it and at night both chicks were tucked up under her wing. I checked them on Monday morning and he was as wild as ever and fast! He hid under her tail when I came.

The other egg never hatched and was discarded after it started oozing.

Well all's well that ends well and the mom turkey has two babies! Yeah the hard work payed off.
Posted by Laura at 6:30 AM 6 comments:

Sheep on the Hillside 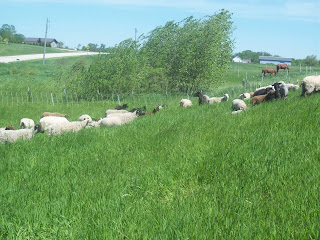 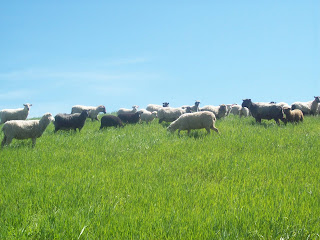 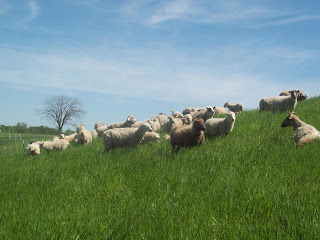 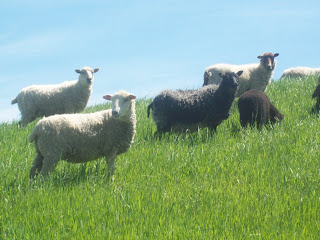 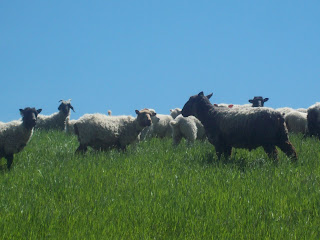