For the rain! We have been very dry here in WI and the drought ended on Saturday. We have been blessed with rain on Sat., Sun. and Mon. with a total of around 3 or 4 in.! Our prayers have been answered. 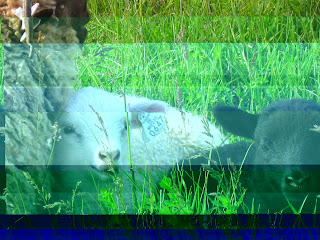 Pures born in May:

All ewe lambs for sale unless marked. (All rams are wethers now.) All are growing well and have nice fleeces. Some fleeces are long and wavy like a longwool and others are fine and crimpy from the Corriedale. If you are interested in a particulate fleece type I can let you know who has what fleece. The F1 crosses will mature around 120# and are good mothers. The F2 crosses will be between 120-140#. They also are good mothers, hybrid vigor will be a bit less, but they could handle being bred to a larger ram than the F1 crosses.

All were put in with the Coopworth and the Corriedale rams. Most can be told apart due to fleece type and body shape.

The lambing rate in the May group is really low, I think due to being bred and then shortly after breeding being fed poor quality hay. I am planning on lambing a group in May next year, but will make sure to feed them really well.  (If sheep get poor quality feed shortly after breeding they can reabsorb or abort a lamb.) I think I will breed to start in the beginning of May instead of mid May next year as well.

So far the pasture born lambs are growing well. Not one pasture lamber needed any help. I only needed to did navels. There were no mix ups or lost lambs either.

I just got some chemical fertilizer spread today on the pastures and now it is raining!!! It is really good to rain after fertilizing as some of the fertilizer would be lost to the air if it didn't rain.

I don't normally put chemical fertilizer on, but the pastures just aren't growing as well as they used to and the grass is thin in spots. I did do a soil test and put on a bit less than it called for (I don't like the idea of contributing to the problem of too much fertilizer and fertilizer ending up in lakes and the sea.) I do spread all of my manure, but don't have enough to do everything. The organic fish fertilizer didn't really make much difference last year. I hope this helps along with the rain to make lots of grass!