This yellow vest is made from 60% Shetland X Merino wool, 30% mohair and 10% silk threads. All from my flock, except the silk! 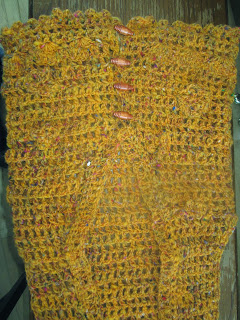 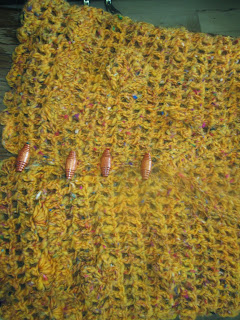 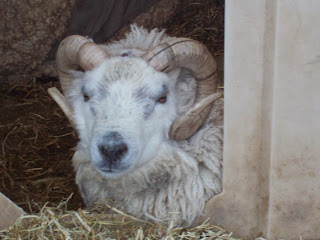 My poor Craigrothie had to be put down. Craigrothie was  a special pet. I have had many sheep (um well, over several hundred, last year I peaked at about 230ish sheep/goats) most are just sheep. Craigrothie was special. He was one of a set of first AI twins from UK semen and he was white, all my other sheep up until he was born were colored. Craigrothie was named after Craigrothie, Scotland.

He was a tame and friendly boy. He loved his scratches and would come running over to be petted.
He was a peacemaker in ram pen, not aggressive ever. Craigrothie also attacked a dog once. My brother came home with an adult male black lab and every day Craigrothie tried to get out until he succeeded. He butted the poor dog several times and "won", I caught
him and put him back (that dog was rehomed with a very nice lady who had dogs.) He was protecting "his" flock. Most sheep are scared of dogs and will run away. (It was summertime and I run my ewes and rams together as they don't breed in mid-summer.)

Craigrothie was an excellent jumper, yeah, he got to stay because he was my pet. He was a pest at breeding. BUT he NEVER smashed a fence.

Craigrothie had a very nice fleece and his lamb fleece won a Champion under Martin Dally at the WI Sheep and Wool Festival. I kept his last fleece from spring and am going to spin it . :) A couple of his daughters live on in my flock, but they are just sheep. There will never be another Craigrothie.
Posted by Laura at 4:13 PM 4 comments: