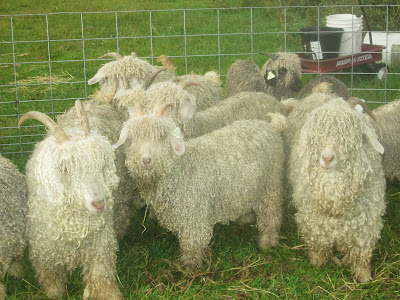 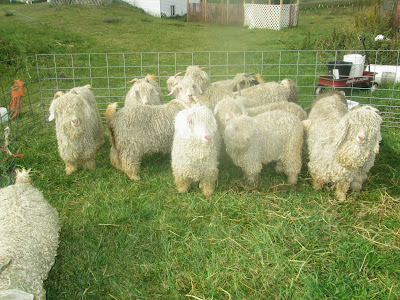 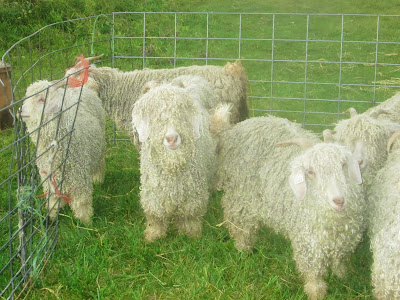 My beauties waiting to be sheared. 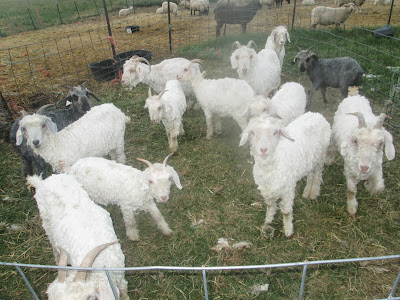 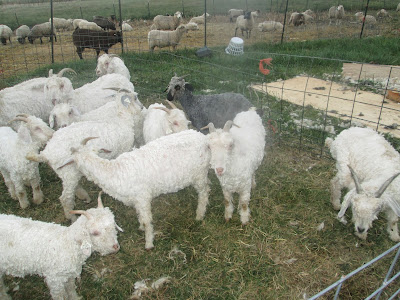 New goats! Everyone looks different and they have to make sure they still have the same 'spot' in the butting order.
Posted by Laura at 7:34 PM 1 comment:

I entered my first sheep shearing contest and competed in August! There were shearers from Canada, Massachusetts, Michigan, Wisconsin, Minnesota, South Dakota, and Iowa between the blade and machine shearers.


I placed fourth out of five. Doug Rathke placed first; Kevin Ford, second (by 4 points); Sy Caryl, third; Alex Moser was fifth. (I believe was also on the US team for the World shearing competitions last year) placed first in the professional machine shearing division and would have done better with better blades (the ones he had were some that were given to him and were dull), he was the fastest! We are judged on quality and time. The judges have a clicker and click for any second cuts, and flesh cuts, and tags left on. I was second for quality in the first heat. Kevin was 33 and I 39 for quality in the fist heat. I was the slowest though. I didn't do as well in the second heat as I got really nervous and cut a few (minor nicks.) Overall I am happy with how I did. There was also prize money which helped pay for the trip and everyone who entered got a free shearing singlet, I didn't take one as I could have worn it for a dress! They had X large and XX large only!
Kevin was also kind enough to help me grind my blades before the competition. Doug and Kevin showed me a slightly different (more correct) way to go up the neck.

This was my list of breeds that I had sheared from spring:

Now my list includes Rambouillet, CVM Romaldale, Teeswater, BFLs, Suffolk X Hampshire (big heavy sheep), Cotswold, Romney, Tunis, Suffolk (that was an amazing job! I got up to 3 1/2 sheep an hour and they sheared beautifully), East Friesian (dairy sheep.)
Posted by Laura at 5:20 AM 1 comment: