First corn as a feed:

We raise Cornish X Rock meat chickens every year. Normally we feed them a meatbird ration made up primarily of corn and soy. This spring we (us and another couple people that use the feedmill) decided we wanted GO free chicken. Joe the feed guy made up a new ration with oats, barley, alfalfa, fish meal and lysine. This was because none GMO corn (even before the drought) was sky high. We are going to put a little organic soy meal in the next batch instead of lysine as they don't really like the taste of lysine.

Wow!  The meatbirds this year are not the normal fat, sluggish, out of breath chickens that they normally are. Normally they walk three feet and are exhausted. They normally eat sitting down as it is too much work to eat standing up. THIS year they  are active and run around and are in my little sisters term, "Normal chickens!" I really can't believe how active they are compared to other years meat chickens. Paul the other guy raising them on the same feed also can't. (The meat chickens also aren't smelly like they normally are.)

Now, this could be because it is a GMO free ration, could be the corn in and of it's self or it could be the soy. (I'll find out if it is the soy soon.) My speculation is it's the corn and or the GMO which is now the same thing being then organic corn is not an option. One organic farmer near us is feeding there cow only small grains and their cows are beautiful clean and not smelly. They do also graze.

What did most people in Ireland grow? Potatoes, potatoes and more potatoes. What do most cash croppers  and farmers grow? Corn, corn, corn and a few soy beans and hay. A few guys in our area grow winter wheat and other small grains. The winter wheat this year is coming off beautifully! There is lots of tick golden straw (used both as a beef/ dry cow feed filler) and good amounts of grain. This year the corn and soy beans are looking ok right now, but if we don't get enough rain soon they will fail. Southern WI, IN , and IL's corn has gone to pot. People both food (grain) and feed (meat and milk) rely heavily on corn. If/when the corn fails there could be a huge problem? People are cutting back, and selling out completely on sheep and beef. Next year and the year after there won't be as many calves or lambs born for beef and lamb. We (the US) are already lower on beef then we had been and the rest of the beef consumed is made up of dairy cows getting slaughtered. At some point, I would assume, there will be a beef shortage.

This is a map of the drought: http://droughtmonitor.unl.edu/ if you click on a region it pops up and then you can click and individual state.

I didn't realize how bad this drought is. I did now it was the midwest and parts of the west, but it is basically EVERYWHERE! We don't know what is in store for us yet, we may get lots of nice rains in Aug. producing a nice third cutting of hay, but we also may not.
Posted by Laura at 5:25 AM 9 comments:

This post is a little off topic, but is about our very important greeter. 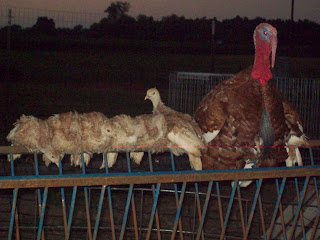 Tommy is a wonderful old guy. He is friendly and shows off to everyone who comes, "See me, look at me, aren't I handsome!" He even likes the turkey poults and has literally taken them under his wing! Look closely under his right wing. These poults are from a hatchery and have no "mom", Tommy has taken over the job, and even comes running to protect them if I pick one up (ex: one gets stuck on the wrong side of the fence and needs help going back) and it screams. 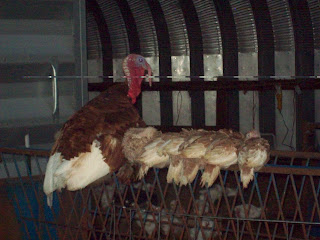 All lined up to sleep. Tommy lost his tail to a dog attack. Unfortunately Tommy has some competition from a young year old tom. The year old tom does not like the poults and pecks them, so Tommy's act really is a bit unusual. (Talking of unusual the most unusual animal couple we've had was a cat and a chicken who was 1/2 the size she should have been as she had something wrong with her. Those to slept together every night under a goat milk stand.)
Posted by Laura at 5:52 AM 2 comments:

Since the last rain..It is getting (err is) very dry again. Sadly for me it rained in both directions from me last Tue. with in 2 miles. We are praying for more rain. I went on a little trip with both my sisters to Lake Geneva and the corn down there, while more mature, is definitely more drought stressed. The trees down there are even wilted! In our area we have had two barns burn down. One was a dairy farm and they lost three cows, the other is a fiber friend of mine and she lost three bunnies, thankfully all of her goats and sheep are ok! Please pray for rain for all the farmers and ranchers who don't have any or enough rain!
Posted by Laura at 1:28 PM No comments: