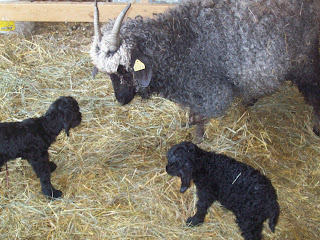 China and her twin bucks. 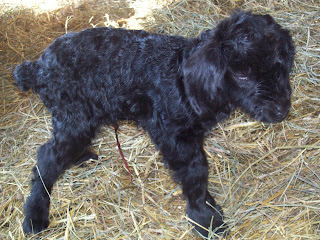 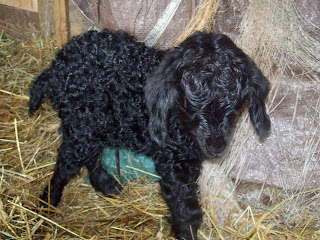 
This morning when I fed the sheep/goats China was making the "baby" sounds and trying to get her kid from last year to follow her. She was not pushing, but I decided to see what was going on. (I have had animals in the past not pushing when they are in labor if the baby is not in the right position.) I reached in and the head was back. The problem was the head kept going back and I could not get it out! I called the vet two time for advice. What finally worked was putting the legs back in, then getting the head out and the the legs again. Yeh! one done. The second one was the same, but at least I knew what to do. I started at 10:00 and when I was done it was 11:00. Buck #1 has some weird problems. He is down on his pasterns and his ribs feel funny-almost like they are broken, but they aren't. His back legs look like an animal with rickets. I don't know what's wrong with him, but at least he's nursing. (He will be castrated if he makes it.)
Posted by Laura at 8:00 PM